The Northern Walking Stick (Diapheromera femorata) is a wingless insect in the order Phasmatodea that is easily overlooked due to its close resemblance to a dead twig.  When frightened, it will straighten out its twig-like body and front legs and remain motionless for long periods.  By blending into its surroundings it gains protection from predators, mostly from birds.  Of the 29 species in the United States, the Northern Walking Stick is the only one found in New England, occurring from southern Canada to northern Florida, and westward to North Dakota and New Mexico. 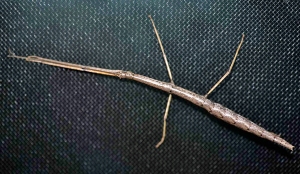 The Walking Stick is one of the most unusual insects that you can see in your backyard.  The one pictured at the right  pretended to be a dead twig on a porch screen in Deering one September day.

The biology of this insect is quite fascinating, as populations in our area require two years to complete their development.  Walking sticks are a hemimetabolous species, with only three life stages (egg, nymph, and adult), and unlike holometabolous species which undergo complete metamorphosis, they lack a pupal stage.  In the late summer and fall, females drop their eggs from the trees onto the forest floor where they overwinter in the leaf litter.  The adults cannot survive freezing temperatures and die with the first killing frost.  Most of the overwintering eggs remain unhatched through the following spring and summer, and overwinter a second year before hatching the following May or early June.  The green nymphs climb up low-growing shrubs and trees where they feed on the leaves.  When mature, they turn from green to brown and feed primarily on the leaves of oaks and cherry in our area.

So the next time you see a twig swaying on a windless day, look again.  It just might be a Northern Walking Stick!

This site uses Akismet to reduce spam. Learn how your comment data is processed.